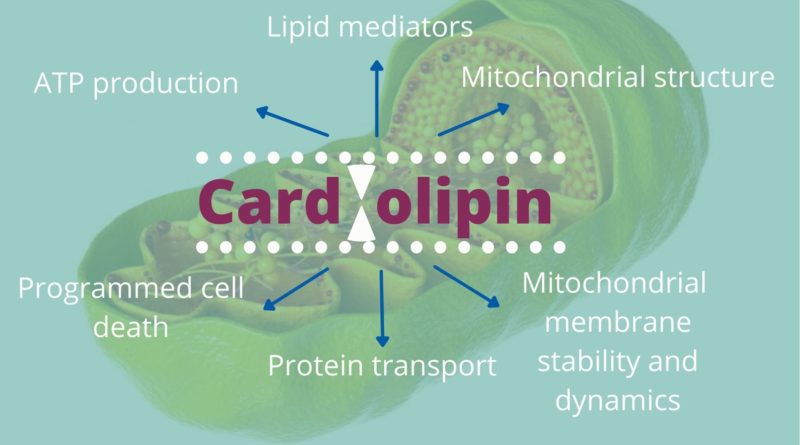 Cardiolipin is a unique phospholipid that has particular importance to mitochondrial function, and therefore the production of energy for the entire body. Research increasingly reveals a diverse range of other roles, too, and suggests that losses are at least linked to ageing and disease. Here is a run down of what we know at this stage… and what to keep an eye out for in future, should cardiolipin prove to be a valuable target.

It is a phospholipid, i.e. one of those fatty molecules that form the bulk of cell (and organelle) membranes. It can’t be lumped together with any old phospholipid though. It’s the key phospholipid of mitochondria, being synthesised and remodelled at the inner mitochondrial membrane, and making up to a whopping 20% of this same membrane. It also comprises up to 3% of the outer membrane (yes mitochondria have two). By the by, it’s also been identified in peroxisomes (lil organelles involved in oxidation and synthesis of other lipids).

It has a couple of unique features, such as being pretty highly acidic for a phospholipid, and having an unusual conical structure. This structure is due to the presence of not two (the common number) but four fatty acid chains.

A (dare I say it, insanely) diverse variety of fatty acids may position themselves in any of these 4 positions- which means that there are a myriad of different ‘species’ of cardiolipin out there. The needs of each specific tissue may influence what kind of species are found there.

Why is cardiolipin important?

Holey moley, the research suggests a large variety of roles and a wide-ranging modus operandi. This is because it interacts with and influences the activity of multiple proteins- from those that form the electron transport chain, to enzymes and substrate/metabolite carrier proteins.

The mechanisms and reasons for these actions are a burgeoning area of research, as yet conducted mostly by people in white coats using isolated cells in labs. But let’s dig a lil deeper into what we do know about these key roles…

Surprise surprise. Because the inner mitochondrial membrane is both the site of the electron transport chain (ETC), and the favourite spot for cardiolipin to hang out, this fatty molecule has been given a job to do.

It doesn’t just hang in the membrane, but it binds to the protein complexes of the ETC. With positive implications for the ETC’s function, yes’m. Not only that, it stops these proteins from being lonely old complexes doing their own thing, and instead brings them together to form supercomplexes. And then it reinforces the stability of the supercomplexes. This ain’t just heartwarming- by working together in supercomplexes the ETC becomes a lot more efficient in creating ATP.

Cardiolipin maintains stability and dynamics across the mitochondrial membrane

The mitochondria need to control the chemical composition of their internal environments.They do this by controlling the passage of molecules through carrier proteins found in the membranes. Binding of cardiolipin to these proteins also affects their activity.

ardiolipin is involved in several stages of apoptosis i.e.  programmed cell death. In most “normal cases”, apoptosis is used to maintain your body’s homeostasis, by forming part of the healthy immune response and mopping up damaged cells. For example, it can help develop and maintain correct functioning of the heart.

To give you some examples of how cardiolipin helps in apoptosis:

You may have heard of prostaglandins, eicosanoids and other such physiologically powerful signalling molecules derived from essential fatty acids. Well, it seems that cardiolipin is just another fat that can also be a precursor to lipid mediators. Eg: 9-Hydroxyoctadecadienoic acid (9-HODE) and 13-HODE. These may be produced  by stress-induced oxidation of cardiolipin.

More research is needed to understand what role these mediators have, as currently we know little more than buckleys. Most targets appear to be in the fluid within a cell… The type, and therefore role, of any given mediator may depend on the species of cardiolipin from whichit is produced (remembering it can be composed of a wide variety of fatty acids).

An abnormal mitochondrial structure can cause dysfunction, abnormal development, ageing and apoptosis. Cardiolipin affects structure in a number of ways. For one, it’s chemical composition gives it its unique conical shape. Because of this, it tends to get wedged into areas where the membrane curves- or may in fact cause bends.

It also interacts with protein complexes responsible for modelling the mitochondria and affects the fusion and fission (joining together and separation) of mitochondria.

In cases of cardiolipin deficiency, mitochondria get bigger. Also, cristae (the internal projections of membrane, where ETC proteins reside) may be disrupted or absent.

The practical importance of cardiolipin

Such can occur when the relative abundance of it or the fatty acid composition/species composition of the population changes, or when there is excess oxidation. Many studies link mitochondrial structure changes in cardiovascular diseases. Finally, abnormal remodelling of cardiolipin can impact function. Once it is synthesised, up to 3 enzymes remodel the fatty acid chains, for better or worse.

Of course, the observed associations between changes and disease are just that- associations. More information is needed to determine whether they are causes or correlations.

Can you improve your cardiolipin pool?

With all these apparent links to health, you may be wondering what you can do to help your cardiolipin out.

Some studies suggest that measured application of stress to the body may increase cardiolipin synthesis. For example, this has been seen in mouse muscles that were loaded up (a proxy for exercise training), and when brown or beige adipose tissue samples were exposed to cold therapy. Further investigation into these areas should yield interesting results.

Besies these, pharmaceutical agents might be used to prevent cardiolipin oxidation and therefore treat related disorders… in the future.

Agents under investigation include a class of peptides (protein subunits) that seem to target cardiolipin, reduce its’ oxidation and improve energy production. One such is the man-made peptide elamipretide, otherwise known as SS(Szeto-Schiller)-31. Its mechanism of action is unclear, but appears to interact with proteins that are also associated with cardiolipin.

Cardiolipin obviously has important roles in mitochondrial metabolism and function, cell apoptosis and tissue health, and the formation of signaling molecules. It thus makes sense that abnormal changes to cardiolipin- be it in quantity, structure, species composition, or oxidative damage- could contribute to ageing and dysfunction. However, it is still relatively early days as far as research goes, and we need more data to clarify whether changes to these phospholipids cause disease states, or are simply associated with them. Following this may come additional research on safe and effective ways to optimise cardiolipin status. The scientific community has begun to look at the impact of pharmaceutical agents, cold therapy and exercise as potential measures- keep your eyes out for more.