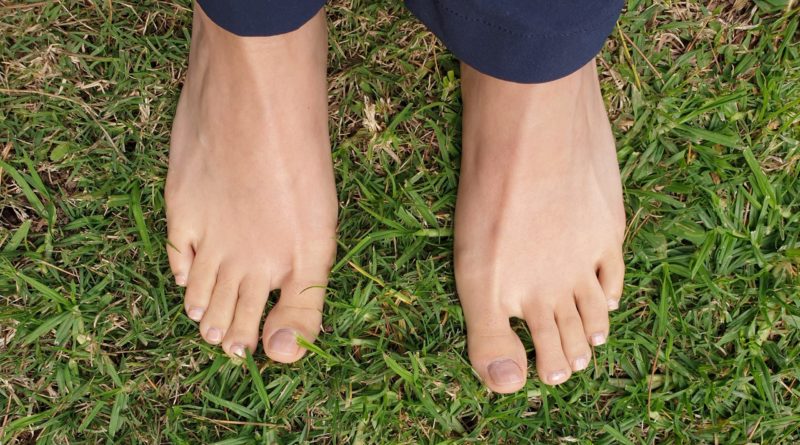 I grew up in a town where it wasn’t uncommon to see people going to a shopping centre with bare feet, wearing pyjamas, while I dreamt of a world where men with well-pedicured feet wore birkenstocks on a casual Sunday. Turns out, though, that perhaps the unpretentious folk in my home town had actually been onto something truly wonderful. Without knowing it, they’ve been tapping into what may be one of the universe’s simple but effective healing powers- known as Grounding or Earthing. So I suppose the last laugh is on me and other shoe-lovers. (Except when it comes to those teddy-bear pyjamas. Then the last laugh is still very much on them).

Grounding, or earthing, most simply occurs when there is direct contact between the earth and the skin- be it of the hands, feet or any other body part (not to be cheeky…). You can also achieve grounding using a sheet, mat, wrist or ankle bands, adhesive patches, or footwear which is connected to the earth. Use of such systems does not appear to be any more effective, but are of value if there are factors that prevent you from having direct skin contact with the earth itself.

The surface of the earth has a negative charge, thanks to the thousands of lightning strikes occurring across the planet at any given time. Each lightning strike transfers negatively-charged electrons to the earth. As anyone who’s received an electric shock from another knows, human tissues are fairly good electrical conductors themselves- so by planting your feet or other body part onto the earth, these electrons can then be transferred to you.

For much of history, this grounding effect was just a normal part of living. (Shoes made of leather would also conduct electricity). More recently, however, with the development of insulating footwear (rubber etc), we’ve been cut off from this source of negative charge. So instead of the human body conducting negative charge from the earth, there is a transfer of electrical charge between the body and the positively charged outdoor atmosphere, or electromagnetic fields from the trappings of modern life (lights, appliances etc). This transfer of positive charge does not appear to be doing us many favours.

There appear to be a number of beneficial responses within the body to grounding… such as benefits to the nervous system; normalisation of cortisol circadian rhythms; improved sleep, reduced stress and improved mood; increased metabolic activity; reduced inflammation; improved cardiovascular health indices. Let’s look at the evidence for some of these benefits in more detail.

Studies have shown a decrease in skin conductance with grounding. This is mediated by increased parasympathetic nervous system input (the system responsible for relaxing processes of resting and digestion) and reduced activity of the sympathetic nervous system (the one responsible for ‘fight or flight’ responses in high-pressure scenarios). These changes, together, are beneficial for stress reduction and improved sleep.

One study showed an approximate 10% reduction in skin conductance within 0.5-4 seconds of grounding. A strength of this study is that it was double-blind, meaning that the placebo effect was prevented. However, there were only 28 participants in the study, so more evidence is required to allow an authoritative claim to be made.

This study also showed that skin conductance increased as soon as the grounding stopped. While the findings are promising, it is also unclear if the reduced skin conductance seen during grounding can provide lasting changes to nervous system activity, beyond the grounding session/s… or whether the bouts of reduced sympathetic activity/increased parasympathetic activity during grounding are adequate to provide sustained health benefits.

Studies have shown an increase in respiration rate, increased oxygen consumption, and reduced concentrations of oxygen in the blood, all pointing to a higher metabolic activity.  It appears that this is maintained for at least 40 minutes after grounding ceases.  In an age where weight and body-composition management issues are common, the benefits this may have is plain.

Again, the evidence from these studies are limited by small sample sizes.

It is possible that grounding reduces inflammation, although the results in this area are inconsistent and the mechanism for any changes needs to be clarified. If this theory is corroborated by additional quality studies, it would be a significant finding- as inflammation is implicated in various conditions, such as cardiovascular and autoimmune diseases.

A 2015 study has shown a reduction in inflammation within 30 minutes of grounding, and has linked this to a reduction of neutrophils and lymphocytes. (These are immune cells responsible for an inflammatory cascade that is crucial for damaged tissues to be cleared away, but which can also cause damage to healthy tissue if unchecked.) However, other studies have shown no significant difference in the number of these cells after exercise that causes muscle damage, regardless of whether participants had grounding or not.

Grounding is just one of many ways nature offers us of potentially reducing inflammation. Others include turmeric and garlic.

With grounding, the negative surface charge of red blood cells increases. The more negative the charge, the more that red blood cells are repelled from each other- meaning they aggregate less. This reduces blood viscosity, which is a significant risk factor for developing blood clots.

Grounding may also reduce blood pressure. In a long-term study of grounding over several months, people with hypertension saw an average decrease in Systolic Blood Pressure of 14.3%.

However, this evidence is limited by the fact the studies only had 10 participants, who may not be representative of the populace at large.

Many studies that showed benefits did so within 30-40 minutes of grounding. So, it may be worth investing this much time spent walking barefoot, sitting on the grass, or otherwise in contact with the earth (or using earthing devices if direct contact is impractical). Daily if possible.

While further studies are essential to definitively prove the effect and mechanisms, the available evidence suggests grounding may have very promising benefits- and in the very least is safe to do. I’d say, if you have access to a safe spot of ground (or devices) that allow you, do it! It’s potentially one of the simplest, most naturally wondrous ways to look after yourself on this great green earth.