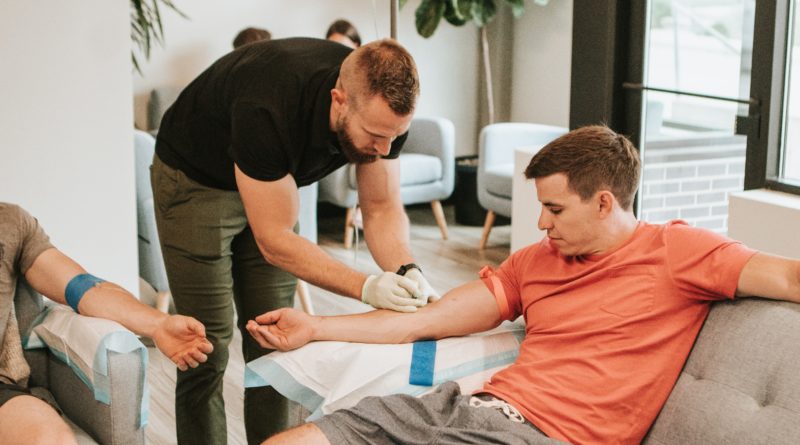 A recent trend in the wellness market are IV vitamin drips. Rather grand claims are made by companies who supply these drips… Depending on the concoction you choose, apparently your skin will be brightened, your brain performance boosted, your libido enhanced, or weight loss will become easy… or a myriad of other options are there for the taking.

What You Will Learn hide
1 So in general there’s more hype than substance… But are there any specific IV drip therapies that work?
1.1 Vitamin C
1.2 Myer’s Cocktail
1.3 Collagen
1.4 Placenta
2 The IV Drip Verdict
3 References
3.1 Related

Strictly speaking, these products are not simply ‘vitamin drips’- they often also contain minerals, amino acids and/or antioxidants too.  But I suppose ‘vitamin drip’ is a less cumbersome label. The premise is that a greater quantity of the goodies can be delivered to your bloodstream directly, than can be achieved by consuming these nutrients the old fashioned way- via your mouth (that’s so last century). Indeed, the use of oral vitamin C supplements has been reported to produce a  peak concentration within the blood of 9.3mg/100mL. In contrast, 50 g/day of vitamin C administered intravenously resulted in a mean peak plasma level of 80 mg/100mL. IV also provides larger increases in blood magnesium levels- at least temporarily.

Unfortunately, despite the greater concentrations of vitamins & other nutrients achieved, there is very little published research to back up any claims of benefit. I found only one article in the scientific literature examining the mainstream use of IV vitamin drips- and this was a single page outlining problems in the market. For example, a company in the UK was pressured to withdraw an expensive ‘fertility drip’, because it was seen as exploiting vulnerable women. Plus, there is no evidence it could work.

Furthermore, the amounts of nutrients provided via IV tend to greatly exceed both recommended dietary intake levels and any recommended upper limits. This presents some questions that need to be addressed, for each and every vitamin, mineral, amino acid: 1) Are there risks associated with such high dosages?; 2) Does the body process and use the nutrient in a different way when supplied intravenously?; and 3) Does this alter the risk and benefit profiles?

As far as I can tell from the public literature, these questions have not been thoroughly researched and answered for all the products that are on the market.

So in general there’s more hype than substance… But are there any specific IV drip therapies that work?

It is still too early to tell. Elsewhere we’ve examined the anti-aging value of IV nicotinamide riboside vs oral supplements. Quite simply, rigorous controlled trials are required. If you’re interested in the use of IV vitamin drips for various aspects of general wellbeing, we’ve got a long way to go.

It is possible that specific nutrients supplied intravenously may offer benefit to people with specific clinical conditions. If you’d like to know about some of these specific concoctions and applications, read below. Should we obtain adequate evidence for them, it still would not support the claims of commercial drip suppliers.

IV vitamin C has been widely distributed. A survey had revealed that some alternative medicine practitioners based in the U.S. provided 11,233 patients IV vitamin C in 2006, and another 8876 in 2008. On average, each patient received 19-24 treatments in a year, at an average dose of 28g. And yet, this is likely to be a shadow of the actual usage of vitamin C drips.: the professionals who were asked to complete the survey were only a small segment of those practicing nationally. And, only a small segment of those who were asked did complete it.

The reasons provided for IV vitamin C use included infection, cancer and fatigue.

A number of studies have examined the effect of IV vitamin C on cancer. Some studies, using rats and isolated cell cultures in the lab, have suggested that doses of vitamin C provided via IV may cause hydrogen peroxide to form in the fluid outside cancer cells. This led to cancer cell destruction, all the while the bloodstream was not affected by similar hydrogen peroxide increases. This is an interesting hypothesis that could be further explored. However, the human studies we rely on to draw definitive conclusions have provided ambiguous findings: we do not know if IV vitamin C actually diminishes tumour growth, what kind of cancers may be susceptible to it, or what doses (if any) have that effect.

There are also numerous risks associated with high dose vitamin C. Practitioners have reported side effects including lethargy or fatigue, vein irritation, change in mental status, nausea and vomiting. It  places people with pre-existing renal impairment at heightened risk of renal failure, and elevates the chance of red blood cells breaking down among people with a certain enzyme (glucose 6 phosphate dehydrogenase) deficiency or a blood disease (Paroxysmal Nocturnal Hemoglobinuria). It is unknown whether there may be other side effects or interactions with other drugs and conditions.

There are also numerous risks associated with high dose vitamin C. Practitioners have reported side effects including lethargy or fatigue, vein irritation, change in mental status, nausea and vomiting. It  places people with pre-existing renal impairment at heightened risk of renal failure, and elevates the chance of red blood cells breaking down among people with a certain enzyme (glucose 6 phosphate dehydrogenase) deficiency or a blood disease (Paroxysmal Nocturnal Hemoglobinuria). It is unknown whether there may be other side effects or interactions with other drugs and conditions.

Myer’s cocktail may be ‘the’ classic IV vitamin drip. It contains magnesium, calcium, Vitamin C, and forms of Vitamins B5, B6, B12, the B-complex (a mixture of all 8 B-vitamins). It has been given for various ailments for decades. (Or a variation of it- its creator didn’t leave any published documents detailing its composition, so later practitioners approximated the recipe from patient’s recollections).

For example, it has been given to treat asthma attacks, migraines, fatigue, fibromyalgia, muscle spasm, respiratory infections, chronic sinusitis, allergies, heart failure, angina, hives, hyperthyroidism and menstrual cramps among others. People have also chosen to have it to improve their overall well being. It is claimed that the cocktail is effective in these regards, however the evidence is largely from anecdotal reports. We do not know if the claims would stand up to rigorous trials.

IV vitamin drips containing essential ingredients of collagen (and possibly elastin) sound like a great beauty-enhancing idea. After all, collagen and elastin are the proteins largely responsible for the growth of new skin, skin protection and repair- i.e. it’s youthfulness. Several face creams already contain collagen and elastin, so surely providing the building blocks of these internally are another, perhaps superior, option to smearing them onto your face?

Unfortunately, my search of the scientific literature revealed a sum total of nil articles directly examining the effectiveness of collagen IV drips. Sure, it is well established that collagen and elastin are key to the skin’s condition, and their degradation contributes to the appearance of aging. It appears that vitamin C, manganese, proline and lysine have integral roles in the health and structure of collagen, and other micronutrients can help in protection from oxidation and inflammation. One website relies on these details as ‘proof’ that their collagen IV product containing these nutrients works. However, the scientific references they use simply outline animal and lab-based studies dating as far back as 1967.

Furthermore, some of the papers cited indicate such basic discoveries such as: an enzyme that is associated with collagen creation is present in lesser amounts in adults versus young animals, and less again in cases of scurvy. Also that a significant amount of newly synthesised collagen is quickly degraded. Does this provide evidence that providing these nutrients intravenously reverses these changes? No. This is a misuse of limited scientific information to extrapolate more ambitious conclusions. Some people should go back to science and/or ethics school *mic drop*.

You may have heard of the recent (and, in my imagination, rather off-putting) trend of parents eating the placenta once expelled from the mother’s body. A further development of this are IV drips delivering an extract of human placenta to anyone not necessarily involved in placental production. Companies purport these drips have anti-aging benefits: that because it is contains stem cells and is a source of carbohydrates, fats and proteins, plus vitamins, minerals, enzymes and nucleic acids (small units of DNA), it will help in collagen creation, hydration and skin elasticity… cell renewal, metabolic activity, liver detoxification… and apparently target hair loss, reduce menopausal symptoms…manage diabetes, high cholesterol and high blood pressure, reduce gastric ulcers and arthritic pain, and just generally aid healing.

The evidence I found is limited to oral placenta consumption, primarily among new mothers. And these claims tend to be self-reported by mothers, which may not stand up to scientific scrutiny. Mothers have claimed that eating placenta improves their mood and milk production, while evidence from animals suggests it may have some pain relief benefits. On the other hand, there are some risks of infection, blockages of blood vessels, and consumption of excess toxins. These risks may not apply to IV placenta by virtue of the extraction and purification processes. But, neither can we assume any reported benefits to be transferable to the general population. I found no evidence to support the myriad of other claims. It would be a near-miraculous substance if there was, perhaps worth overcoming any squeamishness. On the plus side, hopefully some new mothers are making some much needed funds by selling their placenta.

In most cases, you can’t go wrong with simply getting all your nutrient requirements met through a balanced diet, with the possible addition of oral supplements in cases of poor food access or specific medical needs. The appeal of IV vitamin drips is the possibility of not just meeting your basic health and nutritional needs, but supercharging your health. As yet, evidence is wanting.