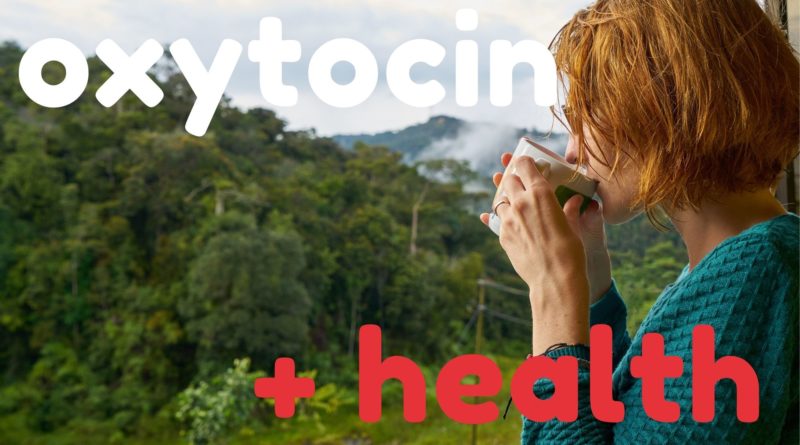 Oxytocin is well known for its roles in childbirth and childrearing, and for “feeling the love” in various interpersonal relationships. However, its importance extends far beyond these appealing benefits. As a hormone and neurotransmitter that is produced in many tissues and widely distributed, it impacts a diverse range of physiological systems. Research continues to emerge which shows that it is may influence mental health, cardiovascular health, weight, pain and cancer, among other areas. Read on for the low down on just what we know about this compound, and how you can optimise your levels.

Contents hide
1 Oxytocin 101: what is it and how does it work?
2 7 roles of oxytocin in the body
2.1 1. Reproductive function
2.2 2. Oxytocin and a healthy nervous system
2.3 3. Cardiovascular health
2.4 4. Weight management and metabolic health
2.5 5. Oxytocin and pain relief
2.6 6. Oxytocin and wound healing
2.7 6. Oxytocin and cancer
3 Can you take oxytocin?
4 Natural ways to boost oxytocin levels
5 The Verdict
6 References
6.1 Related

Oxytocin is a peptide (i.e. composed of amino acids) that acts both as a hormone and a neurotransmitter. It is best known for its motherhood-related effects of stimulating labour and lactation, and its reputation as a “love hormone”. It fosters social behaviours such as maternal caring and bonding between a mother and child- but also between couples or other people. It also has some similarities with vasopressin (anti-diuretic hormone) and has a wide variety of physiological functions, which we’ll explore in more detail below.

It is produced in the hypothalamus then released directly into other areas of the brain, and into the circulation via the pituitary gland. In addition, it can be produced by the cardiovascular system, digestive system, uterus, ovaries and adrenal gland, as well as certain cell types, such as cells lining blood vessels and the skin’s keratin-producing cells.

The amount that is released is influenced by many factors including sensory stimuli and other neurotransmitters and hormones.

You may have noticed that oxytocin could have opposing effects (eg: on blood pressure and cortisol). This may be because both complete oxytocin and its broken down fragments can be biologically active. Breakdown products may have different actions than the original.

7 roles of oxytocin in the body

Oxytocin is essential to motherhood. It stimulates the contraction of the uterus in labour and the smooth muscle cells around the lining of the mammary gland for lactation.  So central is oxytocin to the female reproductive system, that the uterus actually becomes more sensitive to the effects of oxytocin around the time that labour starts, and the efficiency of its action increases. In fact, oxytocin can be given to induce labour if you need a helping hand.  When the childbirth job is done, cells start to reduce their number of oxytocin receptors- meaning there will be fewer places for oxytocin to act on. When it comes to lactation, an infant suckling at the nipple (or even a baby crying) triggers oxytocin release from the hypothalamus into the bloodstream, from where it acts on the mammary gland.

Oxytocin, and the touch between caregivers and child is also critical for an infants wellbeing- even survival!

Oxytocin is not just a female hormone though. It is also produced in the testes, and is thought to induce erection and play a role in ejaculation.  It stimulates contraction of smooth muscle in the prostate gland and throughout a male’s plumbing. It may also contribute to growth of the prostate gland (possibly to the point of benign prostatic hyperplasia).

2. Oxytocin and a healthy nervous system

As mentioned, oxytocin is not just a hormone but also a neurotransmitter. Since it (and oxytocin receptors) are widely spread throughout the central nervous system, it’s going to have a number of neurological effects, including:

However, on occasion (eg: unfamiliar or hostile situations) these patterns can be reversed and it can, for example, trigger an increase in blood pressure and cortisol levels. In rat studies, when a mother perceives a threat to her offspring, she may react defensively or aggressively towards an intruder.

Improved neuropsychiatric health: In cases of anxiety and post-natal depression, giving people oxytocin has been seen to improve symptoms. We have also seen some association between low levels and autism. Studies are starting to explore whether it could assist with social anxiety associated with autism.

Psychosocial effects: It can enhance positive social interactions, trust, and processing of social stimuli. This is known as a ‘calm-and-connection response.’ Given that sociability is influenced by many factors, however, upping oxytocin levels is not guaranteed to produce desired improvements.

It is theorised that whole oxytocin may encourage people to approach social interactions, and then fragments of it promote calm and relaxation effects which often follow positive interactions.

In cases of postnatal depression, administration of oxytocin doesn’t just offer symptom relief, but has also been seen to improve interactions between mothers and their infants.

As mentioned above, oxytocin can lower blood pressure. Pair this with an increased cardiac output, anti-inflammatory and antioxidant effects and improved metabolism, and you have a good recipe for heart and circulatory health.  In rats, oxytocin has been seen to reduce the occurrence of heart arrhythmias and atherosclerosis (plaque buildup in arteries).

Small human studies have shown that a single administration of oxytocin can reduce subsequent food intake. Long-term use seems to decrease weight and improve glucose tolerance in obese animals and humans. However, more long-term, robust controlled studies are warranted. These should also examine the mechanisms of action and any risks associated with long-term use.

Oxytocin may have analgesic effects. Animal studies provide strong evidence, however the results from human studies are more equivocal. It seems that oxytocin acts on parts of the brain that are involved in pain processing, but we lack further detail about its mechanisms. It is thought that perhaps the cognitive and emotional aspects of pain perception may be a target of oxytocin in humans. Further investigation is essential.

Small human studies associate higher levels with enhanced healing of wounds (eg: blisters). A 2013 mice study suggests that oxytocin possibly activates regulatory T cells. These are immunosuppressive cells that can stop the cascades of inflammation associated with injury from getting out of control. Of course, it’d be great to get more evidence for this among humans.

Research shows some links to cancer- but many ambiguities. Importantly, we do not know what precise effect the hormone has or its mechanisms. There are occasions where it seems to be carcinogenic and others where it seems anti-carcinogenic. For example it appears to inhibit cell proliferation in ovarian and endometrial cancers. In contrast, it may promote certain pancreatic cancers and cancers of tissues where the oxytocin is expressed (eg: within the nervous system).  Meanwhile there are many conflicting findings- it may promote proliferation of breast cancers, however cell culture and rodent studies suggest that it can inhibit proliferation of specific breast cancer cell lines. While high levels have been associated with benign prostatic hyperplasia, there is no clear trend in its relation to prostate cancer.

There seems to be many factors which alter the effect of the hormone on cancer- for example, cell type, location, oxytocin concentration and its interactions with other local hormones, and precisely where a cell’s oxytocin receptor is found.

Clearly, much more robust research is needed to understand any role in cancer. Eventually we may have enough understanding to use it as a biomarker and/or target of treatment.

Can you take oxytocin?

It is possible to deliver oxytocin intravenously and intranasally (via a spray). In fact, intravenous oxytocin has been used since the 60’s to push labour along and reduce bleeding after birth. However, it is not appropriate to use intravenous oxytocin over the long term. The intranasal route has been used to promote lactation, and more recently to quell anxiety/stress and promote social behaviours. Mixed results have come from trials of intranasal delivery to people with autism, schizophrenia, anxiety disorders and PTSD stress-related disorders.

The problem with taking oxytocin is that it is not biologically active for long (has a short half-life), and we only have an obscure idea of the parts of the brain it actually targets.

There is little point in consuming it orally, as most gets broken down in the gastrointestinal tract

In the future, it is possible that oxytocin fragments will be available as pharmaceutical agents. Such a method may allow us to obtain the specific effects we want, isolated from other effects. However, more research and information related to this is required. Watch this space.

Quite simply, not enough research has been conducted in this. However:

Hugs and other positive touch are well known to stimulate oxytocin (remember, it is dubbed ‘the love hormone’ after all).  Read about the facts behind the fuss over 20-second hugs.

Nurturing your relationships may also foster oxytocin gains. Association studies have shown that levels tend to be higher in people experiencing high partner support, and lower in women who experienced abuse in youth.

Your microbiome may offer a way to increase levels. However, so far, we’ve only got mice studies to support this. A study published this year (2021) showed an up-regulation of oxytocin in mice fed Lactobacillus reuteri bacteria (purified from human breast milk).

Exercise has potential. Mice performing interval training demonstrated an increase in oxytocin levels. In addition, a small study of 7 endurance-trained runners found that levels increased after a 56km ultramarathon… but a 60-minute treadmill run and a run to exhaustion failed to do so. The rest of us may not need to perform such an epic amount of exercise… Meanwhile, a study of cyclists performing intense exercise displayed no change in levels. More research should be conducted regarding what types of exercise are required among ‘normal’ humans.

Also, soothing music has at least been seen to increase levels in people on the first day of recovery from heart surgery. As expected, this was accompanied with greater subjective relaxation. Whether we can get the same benefits in daily life would be interesting to see.

Oxytocin is an crucial hormone and neurotransmitter for women and men. It plays a variety of important roles beyond childbirth and feeding babies, including in social cohesion, psychological wellbeing, cardiovascular health, and possibly weight management, pain relief, wound healing and cancers. It can be taken into the body intravenously and intranasally in certain situations, however there are problems with and limitations to the potential of this method. I’d suggest a wiser way of boosting oxytocin levels is to do activities that naturally increase your bodies production and/or release of it. Hugging, positive touch and strengthening your interpersonal relationships are good ways of doing this. Unfortunately the research into other natural ways to boost levels is young- but taking care of your microbiome, exercising and listening to soothing music have potential value.