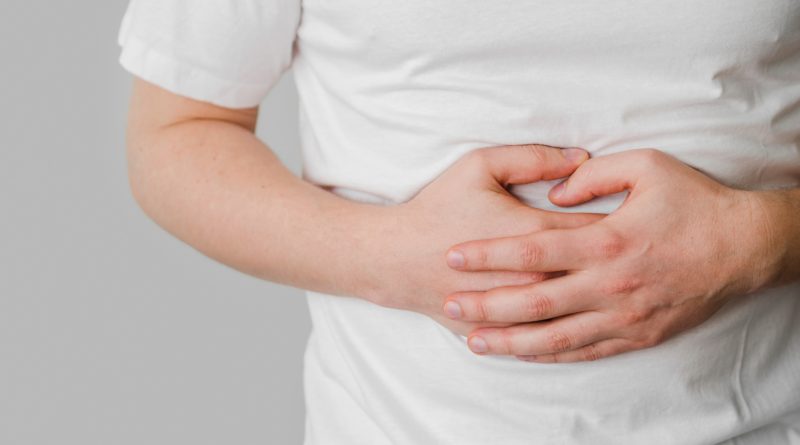 SIBO, short for Small Intestinal Bacterial Overgrowth, occurs when bacteria which belong elsewhere in the digestive tract colonise the small intestine. SIBO is particularly relevant as it is becoming more and more common today. Perhaps this is due to the changes in the microbiota that have been observed over time. Or, an increased awareness of the condition may contribute to the more frequent diagnoses. Regardless, it can result in serious complications, including nutritional deficiencies and the various health conditions that can stem from these.

What is the big deal about SIBO? 2

How can you find out if you have SIBO? 4

Does complementary and alternative medicine have a place? 7

How can I prevent SIBO? 8

What is the big deal about SIBO?

The sheer quantity of cells in our microbiota (estimated to outnumber the human cells in our body by a factor of 10) suggests the significance of bacteria in our existence. In a healthy digestive tract, each part has its own distinct population of bacteria. The differences reflect the role and function of that part. The figure below illustrates the typical bacterial populations of the healthy digestive system: 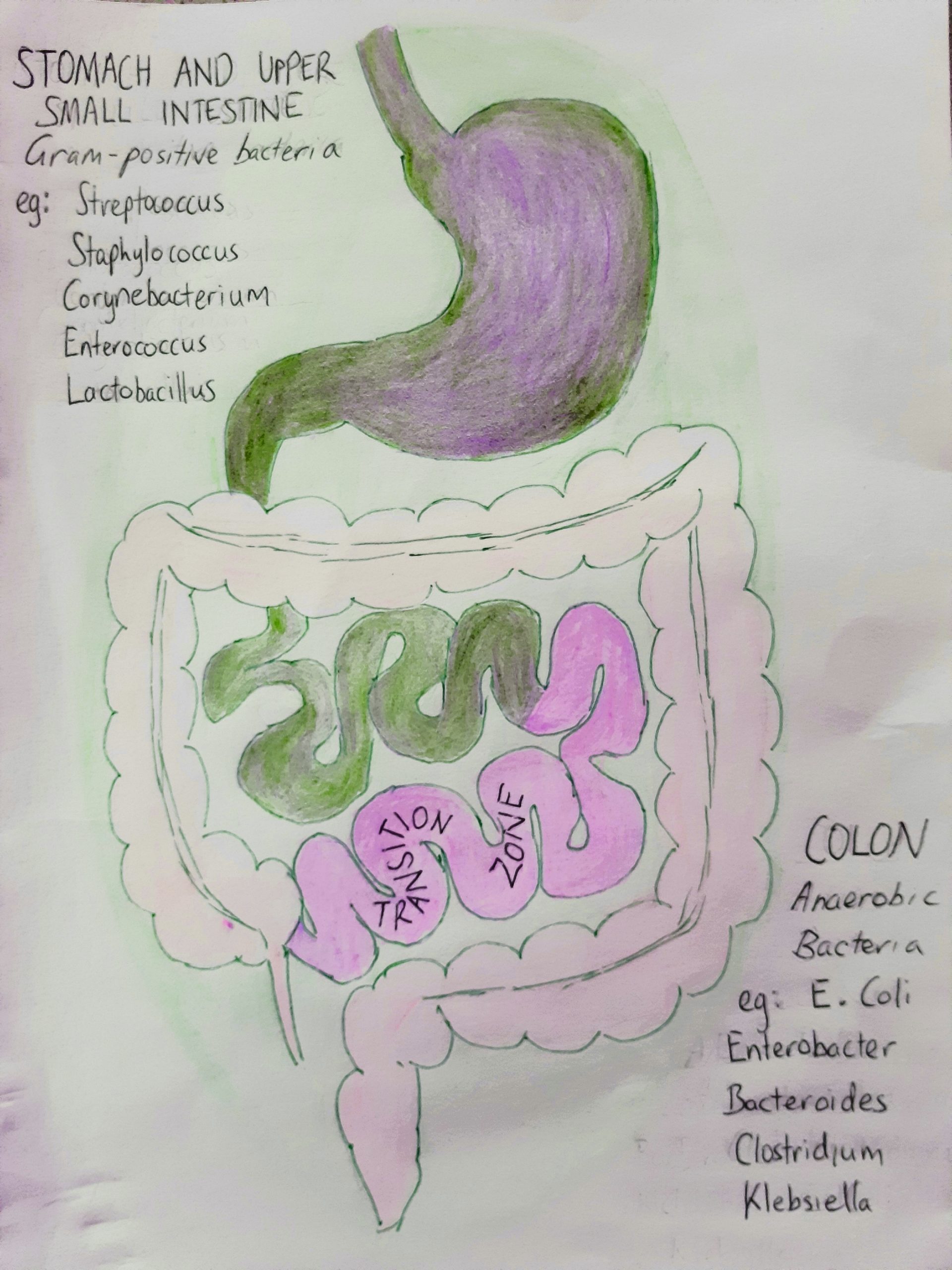 The healthy small bowel vs SIBO

ideally the stomach and upper part of the small intestine primarily contain sparse populations of what we call Gram-positive bacteria. These include names you may be familiar with, such as Streptococcus, Staphylococcus, Enterococcus, Lactobacillus, and Corynebacterium. There should be much lesser levels of anaerobic bacteria here (i.e. those that thrive in environments without oxygen).

However, if there is an excessive population of bacteria that belong in the colon more serious consequences often result. Common causes are a failure of small bowel clearance or an alteration to the digestive tract anatomy.

The healthy colon is more densely populated than the small intestine, and consists of diverse populations of anaerobic bacteria (those that thrive without oxygen. eg: Enterobacter, E coli, Bacteroides, Clostridium, and Klebsiella). There is also an increased number of the gram-positive enterococci and lactobacilli compared to the upper small intestine.

It is more difficult to assess the bacterial composition of lower parts of the small intestine, and so there is a lack of information available on possible consequences of bacterial overgrowth here. However, it is known as a transition zone between populations of the upper small intestine and colon.

SIBO may result in various symptoms, including those that resemble those of IBS and functional bloating: abdominal distention, increased flatulence, abdominal pain, diarrhoea, faecal urgency, faecal incontinence, and nausea. Other symptoms people may experience include weight loss and dehydration.

Besides the unpleasant signs and symptoms, there may be serious complications.

So many things may cause it:

How can you find out if you have SIBO?

As you may have noticed, the complaints experienced by those with SIBO are common to many other gastrointestinal issues. People with SIBO may also have been previously diagnosed with diarrhea-predominant IBS, lactose intolerance, and fructose intolerance.

These similarities mean accurate diagnosis is both essential and tricky.

The best method of diagnosis currently available is  luminal aspiration and culture, where the microbiota is directly sampled. However, there are still issues with this. For one, a single random test may not truly capture your bacterial composition. There may be some variance from day to day. Plus, the site where the sample was collected is unlikely to capture the microbial diversity found throughout the whole length (550cm or so) of the small intestine.

Luminal aspiration is also invasive and costly. To reduce these difficulties, doctors who perform it often sample at a higher level than the one recommended in research. One of the problems with this is that the standards cited in the research for normal vs unhealthy bacterial levels are still used. It could be expected that what constitutes ‘normal’ levels would differ between the recommended and actual sample sites.

A more commonly used method of diagnosis is breath testing. Hydrogen and methane gas are byproducts of bacterial metabolism of lactulose and glucose. So, the principle of these tests is that you consume lactulose or glucose, and the patterns of hydrogen or methane gas production seen will indicate what bacteria are present within your small intestine. Below is an example of graphical results from a sample breath test, where the quantity of gases produced over several time points is measured. The result of this test was negative.

Breath testing is relatively simple, but unfortunately there are a number of issues with it. For instance, it is not able to differentiate between different types of bacteria.  Also, compared with properly performed luminal aspiration, breath tests correctly identify only 60-70% of people who have SIBO, and 40-80% of those people who don’t have it. It tends to overestimate the presence of SIBO, and false-positive tests can occur if someone has rapid small bowel transit. Lung disease, smoking, bacteria in the oral cavity, plus recent exercise and dietary intake can also confound results.

There are more obscure tests that may point to SIBO. For instance, high serum folate (produced by bacteria) combined with low vitamin B12 can be an indirect marker for SIBO. Still, diagnosis would need to be confirmed with other indications. Sequencing the DNA of bacteria found in stool samples or aspirates may be a valuable diagnostic tool in the future. They are being used in some clinics to describe a person’s microbiome as we speak (see below for an example). However, there are as yet there are few publicly available studies exploring this.

What can I do if I have SIBO?

The first port of call is to get medical help to tailor treatment to your needs.

Correct the cause of SIBO (where possible)

SIBO may occasionally be induced by certain medications (eg: proton pump inhibitors). In such cases your doctor may recommend substituting or removing the drug. If you suspect a medication is causing you such side effects, make sure to consult your doctor rather than suddenly ceasing a medication yourself- the consequences of that could be much more dire.

Unfortunately there are times when correcting a cause is impossible. For example, abnormalities arising from surgeries or neuropathy/myopathies are irreversible. In these cases, you can still manage any long-term side effects such as nutritional deficiencies, and possibly use antibiotics or other pharmaceuticals sensibility during symptomatic periods.

Attention needs to be paid to dietary habits, in order to help manage symptoms and ensure your body doesn’t miss out on key nutrients. Whether any dietary change may result in a ‘cure’ is unknown.

A low FODMAP diet often provides effective symptom relief to people with SIBO. FODMAPs are short-chained carbs which the small intestine absorbs poorly… but small intestinal and colonic bacteria readily ferment them, causing gas production. As an oversimplified summary, a low FODMAP diet means limiting lactose-containing foods, rye and wheat, sweeteners such as honey, fructose and anything ending with ‘-ol’ (eg: sorbitol), legumes, and a variety of specific fruit and vegetables.

Identifying and correcting any nutrient deficiencies is imperative. At times this may require supplementation.

People with steatorrhea may benefit from supplements of enzymes normally produced in the pancreas. This enhances digestion and absorption of macronutrients.

Antibiotic use is an option to cripple unwanted bacteria, but is generally not recommended. Why? Well, it’s a treatment that has been largely based on ‘best clinical guesses’ rather than solid evidence of value in relieving symptoms or reducing overgrowth. The success rate is highly variable- from 30 to 100%- depending on the type of antibiotic and dosage, and the specific circumstances of the patient. Also, even if beneficial, it is still very common for SIBO to reoccur. There can also be unpleasant side effects.

Keeping these things in mind, researchers have suggested that a wise approach to antibiotics is to use them primarily with patients with severe “alarm symptoms”. In this case they suggest a cycling regimen of antibiotics and antibiotic-free periods may be necessary to reduce recurrence.

Ideally, antibiotic courses should be customised to the individual, and be used to correct the microbiota rather than eradicate it wholesale. This can be difficult to achieve: first a very clear identification of which specific microbes are in excess is required (which, as mentioned, the common breath tests don’t allow). Secondly, it would be necessary to prescribe narrow-spectrum antibiotics that target these specific microbes. However, broad-spectrum antibiotics that damage a wider variety of microbes are more readily available- including the most well studied antibiotic rifaximin, which targets both aerobic and anaerobic bacteria. Despite this, rifaximin’s popularity lies partly in the fact it is poorly absorbed (by the human intestine), and therefore considered safe.

Does complementary and alternative medicine have a place?

A 2014 study examined the use of herbal products with demonstrated antimicrobial properties. The results suggest that herbal remedies may be as effective as rifaximin. This seems promising… except it doesn’t change the fact that less than half of the participants receiving herbals displayed recovery. Regardless of these underwhelming stats, there are several weaknesses in the design of this study. For one thing, participants knew what treatments were available to them and chose the one they preferred. This introduces a significant risk of bias and placebo effects. Furthermore, the identification of SIBO relied on the imperfect lactulose breath test.

(If you’re interested, the products were formulations of numerous herbs under the names of Dysbiocide and FC Cidal from Biotics Research, or Candibactin-AR and Candibactin-BR from Metagenics).

A 2017 systemic review and meta-analysis suggested that probiotics effectively targeted overgrowth in 51.5-72.8% of cases, and may help relieve symptoms such as abdominal pain.

Another small study showed that rifaximin for 7 days followed by probiotics (Lactobacillus casei) or prebiotics (short chain fructo-oligosaccharides) for another 7 days both led to similar improvements in some subjective symptoms. It is thought that the benefit of prebiotics lie in their support for lactobacilli and bifidobacteria growth, and a production of short-chain fatty acids (eg: butyrric acid) that can aid intestinal lining repair. Unfortunately, in the study no control arm was used, so there were no indications of whether adding either probiotics or prebiotics is better than antibiotics alone.

As you’ve seen, multiple factors contribute to gut health. Getting your head around just how they apply to you and how to improve your microbiome is a complex process, particularly if you’ve been diagnosed with SIBO. That’s why our friends at The SIBO Doctor have created educational resources such as The SIBO Success Plan .This program is led by Naturopathic Dr Nirala Jacobi, a world-leader in gut health and SIBO. Over the course of 8 lessons, you’ll become empowered with all the tools you need to finally understand and overcome your SIBO. The SIBO Doctor also offers comprehensive training for health practitioners.

How can I prevent SIBO?

With its increasing prevalence and serious consequences, looking to minimise your risk would be wise. The main preventative factor seems to be good small bowel motility. Having a fibre-rich diet, drinking plenty of water and limiting your caffeine intake are basic things you can do to put you in good stead here.

Although probiotics are generally beneficial to health, it seems they don’t help prevent SIBO.

SIBO is an increasingly common problem with potential to cause significant complications. Modern life may or may not be placing us at increased risk. Nonetheless, it’s advisable that everybody attends to their fibre, water and caffeine consumption to minimise their personal risk. Diagnosis is not perfect, but if you do receive one, you want to correct the cause where possible, manage symptoms and address nutritional deficiencies. Each person who has SIBO will require a personalised treatment plan