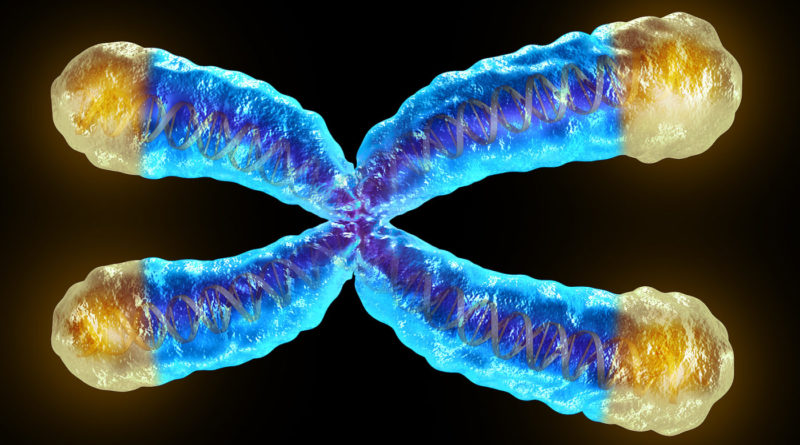 Our chromosomes don’t just contain genes. Another key part are telomeres- protective caps at the ends of DNA strands. They help in keeping chromosomes stable and mutation free. Their length has an important impact on your overall health. Here we explore the fundamental things you need to know about telomere regulation and factors that unfavourably alter them. Later in this 3-part series, we look at genetically inherited telomere syndromes and conditions associated with telomere changes in adults- and what can be done about them.

Short telomeres are related to a large number of diseases and can trigger an end to cell replication, plus genomic instability and deteriorating function.… however long telomeres can also be problematic. For example, they can support increased proliferative growth of cells, and thus increase risk of some cancers.  So, like in many things, there’s a ‘goldilocks zone’ when it comes to telomere length.

Keeping in mind that each of the 46 chromosomes in cells (23 in sperm/ova) have telomeres, there is a theory that it is the length of the shortest telomere, as opposed to the average telomere length, that is most critical.

Look at the people nearest you. Chances are, there is a wide variety of telomere lengths between you all. A number of factors can play a role, as illustrated below.

How your body regulates telomere length

An enzyme called telomerase helps maintain telomere length. It’s present throughout the body during early prenatal development, but is quickly lost from most cells. Only  reproductive cells, activated lymphocytes and some stem cells still contain telomerase in adulthood. Telomerase activity is tightly regulated in normal development.

The Shelterin complex (a group of proteins that flank telomeres) also protects telomeres from shortening.

TZAP (telomeric zinc finger–associated protein) competes with the shelterin complex over binding sites on telomeres. When bound, it can stimulate telomere trimming and prevent telomere lengthening.

In the prenatal period, cells throughout the body have similar telomere lengths. This is because telomerase activity is widespread. Later in prenatal development, as telomerase is lost in many cells, a difference in telomeres between different tissue types starts to develop. This becomes increasingly prominent in the first two decades of life. The speed at which a telomere shortens is affected by how proliferative a cell is. For example, muscle cells have a low turnover, so their telomere length shortens more slowly than that of leukocytes (white blood cells).

The continued shortening of telomeres of the skin, fat, muscle and leukocytes in adulthood happen at similar rates.

Telomere shortening throughout the lifespan

It appears that telomeres shorten most quickly between birth and 3 or 4 years, when there is a lot of growth, cell proliferation and expansion of the immune system. From young adulthood through to old age there is a steady, gradual decline.

In the period between early life and young adulthood, the patterns in telomere shortening are unclear; it is thought they either remain relatively stable “maintenance phase” or decrease slightly.

However, studies of the telomere lengths of infants are extremely small and don’t have a great long-term follow up of participants, so this needs to be taken with a grain of salt. In most cases, not much can be done about the lack of follow up, as it is considered unethical to follow up healthy children for research that will not improve their health. Longer-term data is available from some children with major health risks, but this limits the generalisability of findings.

For children who have high losses to telomere length in the early stages of life, there are unfortunately associations with reduced longevity.

Telomeres: a marker of ageing?

The natural shortening of telomeres has received some blame for ageing. That is to say, it possibly accounts for some of the less desirable effects we see, such as reduced function of collagen-producing fibroblasts.

However, a telomere doesn’t just have to be short- it has to be short enough before any undesired effects are seen. When telomeres reach this critical shortness, the shelterin complex is disrupted, and an uncapped double-stranded chromosome end is exposed. Specific DNA damage response proteins recognise the uncapped chromosome as damaged, and changes to the cell structure are initiated. A dysfunction referred to as ‘cellular senescence’ ensues, marked by limited capacity of stem cells to regenerate degraded tissues, promotion of an inflammatory protein, plus changes in gene expression and non-DNA genetic factors. Hence the link to ageing, as well as age-associated diseases (eg: cardiovascular disease, diabetes, osteoarthritis, glaucoma and cataracts). Senescence within the immune system can also contribute to increased cytokine (signalling protein) production and the increased susceptibility to infectious diseases commonly seen in aging.

Because of these observed changes, telomere length has been embraced in some corners as a potential ageing biomarker. Well known health indices such as blood pressure, cholesterol and body mass index become less strongly associated with mortality as we proceed into old age, so it would be supremely useful if telomere length was a reliable, valid biomarker… however, it is not. There is no consistent relationship between ageing and telomere length.

If that’s not enough, there are additional limitations which mean it doesn’t meet the basic criteria for an ageing biomarker. For example:

While it would make sense for telomere length to be related to lifespan, their value in predicting it is likelwise questionable. The association between telomere length and age-related mortality becomes weaker with age… by very advanced age it has completely lost its predictive qualities. On the other hand, the telomere length in early childhood is a relatively good predictor of life expectancy.

A long-standing assumption has been that oxidative stress may also contribute to telomere shortening. There are numerous reasons for this assumption: for one, it seems chronic oxidative exposure impairs DNA repair.

Also, the antioxidant capacity of cells has been positively correlated with their proliferative capacity and inversely correlated relationship with telomere shortening.

However, correlation is not causation. And there has been a study where increased antioxidant enzymes were not paired with an increase in Leukocyte Telomere Length in obese middle-aged women. More research on the capacity of antioxidants to protect telomeres is needed.

Back to the key point, the relationship between oxidative stress and telomere shortening is not so clear-cut as was long thought. Why? Well, the evidence has largely been based on cell culture studies. But- hooray for progress!- a 2019 scientific review suggests that in vivo studies (those conducted within a whole body) indicate greater complexity. The researchers postulate a new hypothesis: that telomere length and metabolism are closely related independently of the generation of oxidants. They propose that telomere shortening may be an energetic trade-off, ensuring survival in times of energy scarcity while also impacting on the health and longevity of a cell.

Another interesting point is that milder, transient forms of oxidative stress may actually protect telomeres by stimulating repair and antioxidant defense systems.

Telomere length has a central role in ageing and the quality of cell function- but stops short of being a fail-safe marker of aging or longevity. We’ve seen that biological and external factors- some modifiable, some not- can impact on telomere length. Stay tuned for Part Two to delve into the implications of telomere length changes in childhood, and in adulthood in Part Three. There we’ll also look at just what can be done to look after this tiny but critically important structure.

2 thoughts on “Telomeres: A Fail-Safe Marker of Ageing and Longevity?”