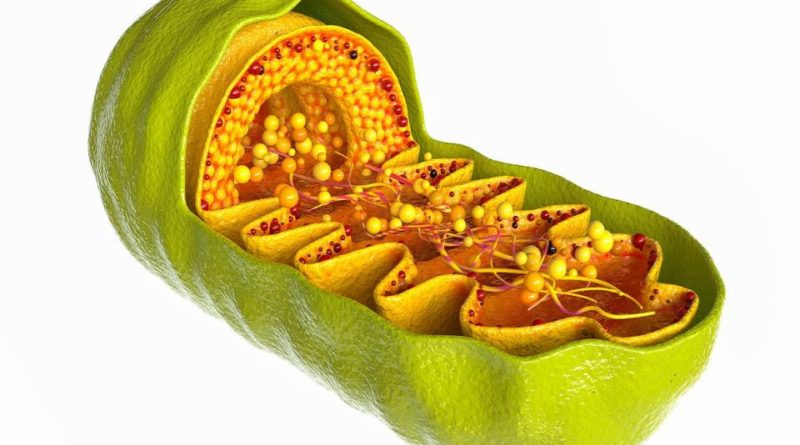 Mitochondria: little compartments with big impacts within cells. Without them, you wouldn’t be able to use oxygen to release energy from food, and they are crucial to a number of other cell regulation and metabolic processes. Here we look at factors that can compromise mitochondrial function throughout life, and the potentially wide-reaching implications. Stay tuned next week for an investigation of methods to boost or maintain their function.

Mitochondria are found within all our cells (see image below). They are the site where oxygen is used to release energy from your food. That is, where the Electron Transport Chain and oxidative phosphorylation occur– the final of a series of processes in the production of ATP. The human body produces and uses approximately their body weight in ATP every day, which indicates just how important this is. 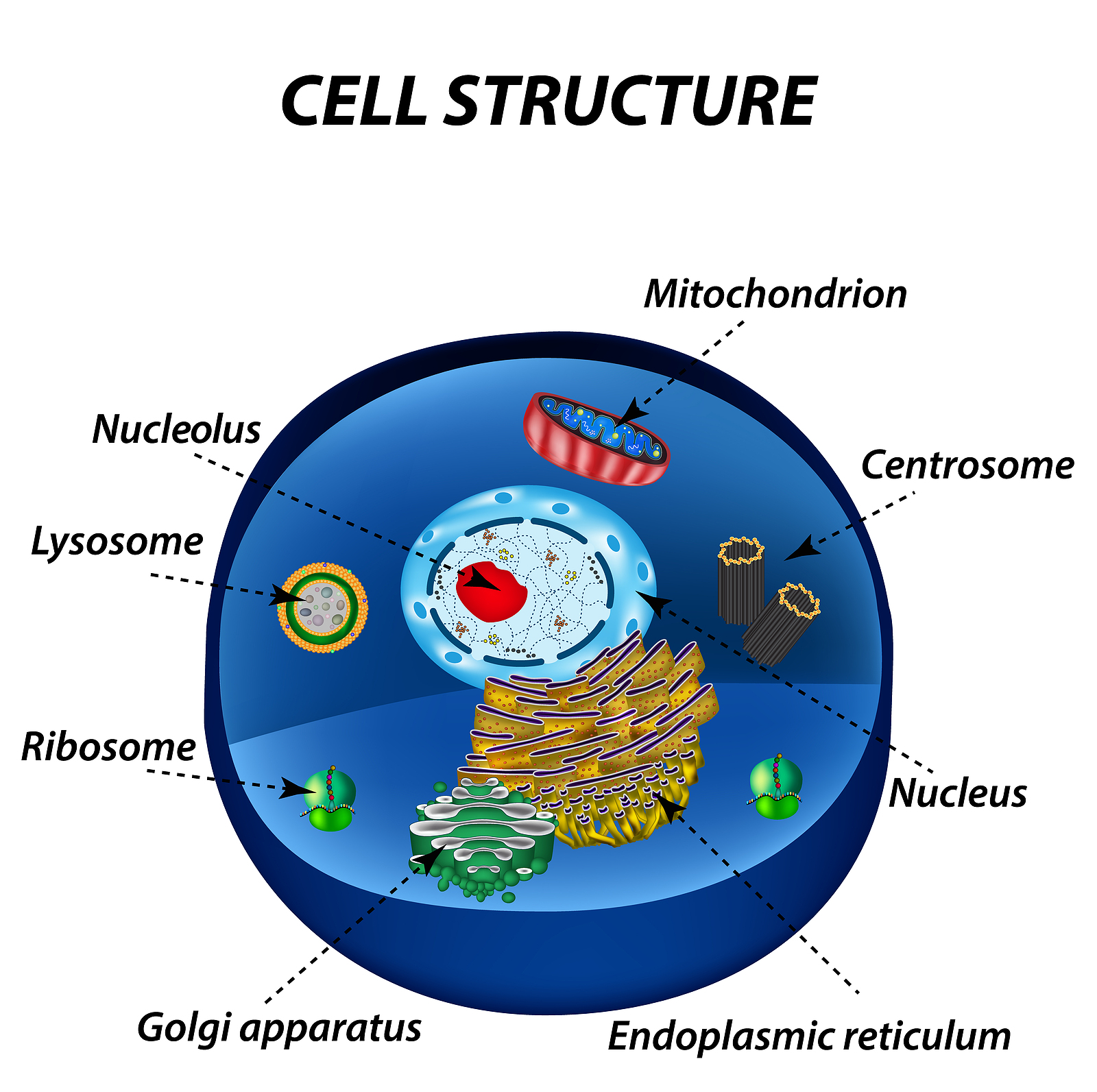 Not only are mitochondria key players in ATP production, they are involved in amino-acid, fat and steroid metabolism, regulation of calcium levels within the cell, production of free radicals and regulation of programmed cell death.

With all these roles, it’s hardly surprising that a quick literature search reveals the loss of mitochondrial function is associated with a seemingly endless range of diseases eg: metabolic and age related disorders, degeneration of the nervous system, cancer, heart attack and stroke. There are cases where people are born with mitochondrial diseases through key genetic mutations, with profound effects on multiple bodily systems. Here, however, we examine the impact of losing mitochondrial function over time. It is believed this is caused by small alterations to many genes, and the interactions between these genes and the environment.

What is oxidative phosphorylation?

Two membranes line the outer surface of mitochondria. Oxidative phosphorylation is a complex series of reactions (i.e. the Electron Transport Chain) that occurs across the inner membrane. The end result of this is that ATP is produced from ADP.

As is often the case with poor health, oxidative stress is one culprit.

Most of our genes are found within the nucleus of our cells. These include genes for approximately 1,500 proteins that are necessary for mitochondrial function. However, mitochondria also have their own unique DNA, which encodes 13 proteins crucial to the Electron Transport Chain.

A natural result of oxidative phosphorylation is the production of reactive oxygen species (ROS) such as superoxide. These can react with other molecules to produce further free radicals. As the mitochondrial DNA lies close to where these free radicals are produced, it is susceptible to damage and possible mutations. It’s been proposed that these losses cause dysfunction.

In addition, DNA may also be exposed to ROS produced in the inner cavity of mitochondria during an earlier step in metabolism (the Krebs cycle).

Overall, studies show that the rate at which ATP is produced within muscle (i.e. mitochondrial function)  declines with age. While some studies dispute this, a number of study weaknesses could account for the controversy. For example, the results may be skewed due to insufficient study sizes, using a prohibitively narrow age range, and the effect of activity levels not being accounted for. In addition, not all studies use the same muscles for their assessments- and the effect of age can differ between muscles.

One study that recruited 146 healthy adults between the ages of 18 and 89 was able to take into account the effect of age. So that the effects of individuals’ exercise and fitness levels wouldn’t confound results, it was ensured that everyone exercised less than 30 minutes, twice a week. The study showed that not only ATP production, but also the synthesis of mitochondrial DNA and proteins, and mRNA (gene transcripts encoding mitochondrial proteins) decreased with age. Furthermore, the oxidative damage to mitochondrial DNA accumulated with age. Cell culture studies support these findings, suggesting that both the amount of mitochondrial protein within muscle, and the function of the remaining protein, decline with age.

Abnormally high levels of calcium within the cell, or the activation of certain immune system proteins by viral infections or cellular stress may also contribute to mitochondrial dysfunction.  The mechanisms of these are beyond the scope of this article.

If the mitochondria in your muscle are less able to produce ATP, the muscle will be able to tolerate less aerobic work. With mitochondrial dysfunction, you also lose some ability to adapt your ATP production rates according to the metabolic demands of the various tasks you do throughout a day. This naturally tends to happen with age.

However, the good news is that in trained people, it seems that mitochondrial function does not limit aerobic capacity. Instead, blood supply to muscle is the limiting factor.

There is clearly a link between diabetes/impaired glucose tolerance and a reduced ability of the mitochondria to oxidise fuels. However, further research is required to get a complete picture of the nature of this relationship.

It does appear that lower ATP production rates are associated with a higher glycemic response to a meal- i.e. a more dramatic, uncontrolled spike in blood glucose levels. In diabetes there’s also an association between lower ATP production rates and higher levels of fat within muscle cells, adipose tissue and the liver. It is thought that this fat storage may be caused by a poor ability to switch from one fuel source to another, i.e. reduced capacity of mitochondria to unleash energy from fuel.

Another interesting observation is that while insulin normally stimulates production of mitochondrial genes and proteins, diabetes dulls this response.

Research ranging from animal and cell culture studies, to brain-imaging and post-mortem studies, to genetics suggest mitochondria play a role in mood disorders and schizophrenia. In addition, while actual mitochondrial diseases are rare, it appears that milder levels of impairment are common among people with mental health conditions.

As the brain is very metabolically active, ATP provision is crucial. ATP fuels diverse functions including the transmission of nerve impulses between neurons, neuroplasticity, resilience of cells to environmental stress and behavioural adaptation. Poor mitochondrial function reduces neuroplasticity and resilience, which can lead to atrophy (shrinking) of some brain regions. As there is an association between these changes and mood disorders and schizophrenia, mitochondria are thought to have a special role.

Mitochondria also control calcium levels within a neuron,  which in turn affects the release of neurotransmitters from neurons and short- and long-term neuroplasticity.

The generation of Reactive Oxygen Species- often considered a negative- by mitochondria can be of practical value. They can be used to direct programmed death- when certain synapses or projections from neurons are killed, it allows a remodelling of neural pathways’ structure and function.

There is strong evidence that dysfunction in ATP generation has at least some role in several neurological disorders- for example- epilepsy and brain injury. In the case of parkinson’s disease (and possibly alzheimers), mitochondrial proteins fold abnormally. This can cause the proteins to clump together, altering the function and structure of mitochondria.

It could perhaps be argued that mitochondrial function is particularly important to the heart. The heart requires a lot of energy to pump but only has enough stored for a few heart beats (even at rest). While the heart only accounts for approximately 0.5% of body weight, it uses up 8% of ATP. Thus the constant production of ATP by mitochondria is crucial and the heart has more mitochondria than any other tissue- among different mammals, they make up 25-30% of cardiac cell volume.

With this high demand for ATP, it makes sense that mitochondrial dysfunction appears to be one (of many) contributors to heart failure. The heart can not obtain adequate ATP, especially during times such as exercise where demand increases. A healthy heart obtains 60-80% of its energy by oxidising fat, followed by glucose, lactate & ketone bodies. Instead, the heart is forced to rely more on anaerobic glycolytic pathways for fuel.

A number of other negative effects on heart function can be brought about by mitochondrial abnormalities (eg: imbalance in calcium levels, problems with blood vessels, disruption of the protein within heart muscle, and changes to cell differentiation).

People with heart failure also display mitochondrial dysfunction with skeletal muscles, which adds to their poor tolerance of exercise.

The kidneys are likewise metabolically active organs requiring constant ATP supply. Mitochondrial dysfunction has been implicated in a wide variety of kidney diseases.

Mitochondria are essential for energy production and the functioning of your cells. Oxidative stress, ageing, elevated calcium levels and activation of certain immune system proteins can compromise mitochondrial function, with implications for your heart, brain, muscle, kidneys and metabolic systems.