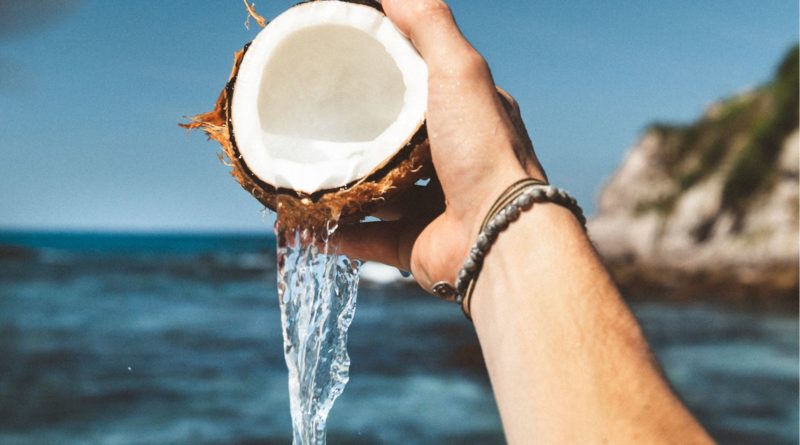 Regular readers will know our aim is to equip you with reliable information on health trends that will help you make empowered decisions about your health… and to do so in a timely manner. To that end, here we examine the properties of one of the most popular beverages of the last decade or more: coconut water. Joking aside, it has been taken for granted as a super healthy beverage and regularly consumed by many for some time now… but the body of evidence is actually still in its infancy. How well do we know the facts?

Coconut water is the clear liquid that comes from the centre of a coconut. Not to be confused with coconut milk, which is the white meat pulverished into this water. It is slightly acidic, and sterile- which means drinking it straight from the coconut shouldn’t pose a problem even in medical situations.

It’s important to note that its composition varies depending on the type of coconut… and also with processing and storage methods, and changes as the coconut matures (see more about this below). For example, the quantity of salicylic acid and antioxidants decreases… Young coconuts are green and generally classified as those that are six-seven months old; mature ones are one year old.

It’s hardly surprising that coconut water has numerous biologically active bits, given it comes from a plant. These include the amino acid arginine, vitamin C, several minerals, including decent amounts of calcium, magnesium, potassium and selenium, and small amounts of the B-group vitamins that are essential as coenzymes to many cellular reactions. You can see specific nutrition data in the table below. Keep in mind that these values may not be representative of all coconut water products.

Although the figures in this table look pretty precise, they can’t be relied upon as so, as the values differ according to the source… this can be related to both the product being tested and the testing procedures.

Oh, you want more detail? Well, this claim seems reasonable seeing as the bev sure tastes and feels refreshing… and it contains electrolytes that are key to rehydration. In fact, there have even been reported cases where it’s been used for short term IV rehydration- as far as I know this has only happened in remote regions where standard IV fluids are unavailable though.

Hold on though- the electrolyte composition of coconut water is unbalanced (i.e. out of sync with the blood)… it contains magnesium and calcium, but is particularly high in potassium while being low in sodium. (The potassium:sodium ratio is approximately 2:1). Excessive potassium in the blood can actually be life threatening, wreaking havoc with your heart. So young coconut water can be used in the beginnings of mild diarrhoea (i.e. when moderate amounts are used to rehydrate). BUT neither young nor mature varieties should be used when diarrhoea or dehydration is severe, or if you have kidney disease or uncontrolled type 1 diabetes among other conditions, are using some medications (consult your doctor).
When it comes to recovering from dehydrating exercise, young coconut water is about as useful as good ol’ water or a carbohydrate-electrolyte sports drink. Albeit this evidence came from a small study of  only eight people. One potential advantage is that it may be better tolerated than these other options. More research should be conducted to back up such subjective reports. It’d also be worth examining the value of coconut water with added sodium.

As you’ll see below, though, there are also cases where coconut water seems to have a diuretic effect.

Does coconut water protect your heart?

Leaving aside the risk of consuming too much potassium if you are at risk or drink excessive amounts, there is some evidence of a positive effect cardiovascular risk factors and markers. However, more robust human evidence is required.

Some other unfortunate rats were given induced heart attacks. Those that were also fed young coconut water displayed lower activities of several enzymes that can mark damage to the heart muscle. (If you want to know specifics, these were creatine phosphokinase, serum glutamate oxaloacetate transaminase, serum glutamate pyruvate transaminase and lactate dehydrogenase).

There is also some suggestion that some people with high blood pressure may benefit from regularly drinking coconut water. For once we have human evidence for this- albeit from small studies. In one, 71% of hypertension sufferers drinking coconut water saw some drop in their systolic blood pressure. There is suggestion that it may achieve this through diuretic effects (people have reported they urinate more), or by increasing blood potassium levels.

Maybe, if you ask yet another group of rats. They were given diabetes by way of the drug alloxan. Those receiving coconut water for 45 days had improved blood glucose and insulin levels. Furthermore, enzymes that metabolise carbohydrate became more active, more glycogen was stored in the liver (a process that reflects insulin sensitivity). Perhaps most impressively, the damage caused to the pancreas by alloxan was reduced, and regeneration of the pancreatic cells that synthesise and release insulin was observable.

Does coconut water have anti-inflammatory effects?

You guessed it… we turn to more rats to give us an inkling on this. They had inflammation (in the form of paw oedema) induced, and this was combated by coconut water.

Assuming we humans can also experience anti-inflammatory effects, the question is how? Well, Coconut water has an unique composition including flavonoids and micronutrients with antioxidant potential- for example kinetin, which in cell cultures has been seen to protect proteins and DNA from the calf thymus (see more about this molecule below). It contains abscisic acid which inhibits inflammation and also has antihistaminic effects. It may  also have something to do with salicylic acid, a component that gives aspirin its anti-inflammatory effects.

The authors of the rat study noted that the anti-inflammatory effect was stronger when young coconuts are used; and there is more salicylic acid present in young vs mature coconuts. Unfortunately the antioxidant content  decreases as the coconut matures.

Coconut water is home to a lot of plant hormones, including kinetin,  trans-zeatin and their derivatives (all belong to the cytokinin class of phytohormones).

In cell culture studies (and fruit flies), kinetin and derivatives have been seen to have anti-ageing effects eg: in skin cells and cells which line blood vessels. If this is in time proven to be true in human clinical trials, kinetin will join phytoestrogen in the ranks of skin-supporting phytohormones.

Thanks to cell culture studies it’s also been (prematurely) spruiked as a potential means of preventing blood clots (through anti-platelet effects) and possibly inhibiting growth or being toxic to some types of tumours. If these were true on a clinical level, questions would remain regarding dosage required vs that provided by coconut water.

Recent evidence suggests trans-zeatin inhibits the breakdown of the key parasympathetic nervous system neurotransmitter, acetylcholine. That is to say, it can safeguard the sending of neural messages. Because of this, some researchers have indicated it can be used to treat conditions such as Alzheimer’s disease and dementia. Furthermore, it also seems to prevent the formation of amyloid β-proteins, which contribute to Alzheimer’s disease.

Also, just like kinetin, cell culture studies suggest it can have anti-ageing effects on skin and may have anti-tumour activity. These may be worth exploring in clinical studies.

What makes the best coconut water?

The best option would be drinking straight from a young, green coconut that has recently been taken from a tree. When that is not an option, i.e. for all of us who don’t live in the tropics, there’s a few factors to take into account.

The composition will vary according to depending on the variety of coconut used, production methods and storage. Pasteurisation is often used as it’s a  useful preservation method. Unfortunately the heat speeds up the degradation of antioxidants and other nutrients. Contact with air and exposure to acids or alkaline also increases degradation.

Young coconuts are reportedly used, and as you may have picked up they appear preferable for health reasons. However, environmentally speaking, such harvesting is considered premature and not sustainable. Which puts us in a bit of a quandary.

We don’t yet have the evidence to definitively confirm or refute many of the claims surrounding coconut water. It certainly can be rehydrating in cases of mild dehydration- but likely only as much as water or sports drinks; and should be avoided in a number of situations. As far as its effects on cardiovascular risk, diabetes, inflammation, cancer, the skin and nervous system goes, the jury is still out.