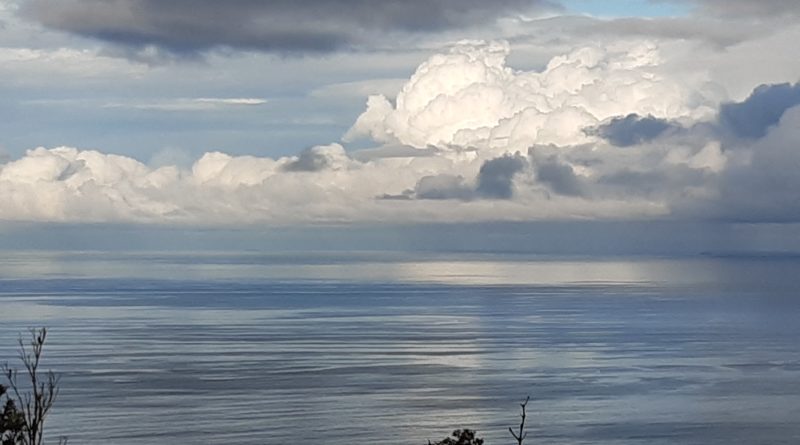 I’ve been lucky enough to spend most of my years living by the sea. However, it took two years of living and working in London to truly appreciate it. When I returned home, my eyes (and nostrils) were truly opened to how wonderful it is to have your air scented by the sea, and how therapeutic time in the water could be. Yes, I recalled old stories of people going to ‘take the waters’ à la a Jane Austen character, so I knew using seawater for healing wasn’t a new idea to humanity. But I was suddenly struck that there might be real substance to the practice… Sometimes I’d wade into the sea as lethargic as can be, and come out feeling alive, happy and focused. After a period of regular swimming I also noticed that some marks I’d had on my knees for years had suddenly disappeared. I have no actual evidence that the salt water cleared them, but I can’t help wonder… What health benefits does sea water actually have?

What You Will Learn hide
1 Why does seawater exert therapeutic benefits?
2 Seawater and skin health
3 Seawater and upper respiratory tract infections
4 Mood, musculoskeletal conditions and immunity.
5 On another note…
6 The Verdict
7 References
7.1 Related

Anecdotes (reported by people other than me) hold that seawater can help with skin health, upper respiratory tract infections and mood. In earlier times, it was also (erroneously) believed to cure conditions as diverse as scurvy and leprosy.

Let’s peer beyond the surface into some scientific depth!

Why does seawater exert therapeutic benefits?

Many of the benefits are attributed to the high concentrations of minerals such as chloride, sodium, potassium, magnesium, calcium and sulfate, in comparison to other natural water sources. Another contributor is thought to be cold temperatures of seas. More on how these affect different physiological systems below.

The high concentration of sodium and iodine gives seawater antiseptic properties, which aids in cleaning and healing. However, each sea/beach also contains varied levels of pollutants (from chemical pollution, sewage run off etc), carrying variable risks of bacterial infection. So all up, it’s a safer bet to avoid swimming in the sea with wounds.

However, the high concentration of minerals in seawater may help in the management of common skin conditions such as psoriasis (which affects 2-3% of the global population) and eczema (which affects approximately 1 in 3 infants and 10% of Australian adults).

Psoriasis is an autoimmune condition that can result in painful patches of itchy, scaly skin. While improvements after seawater bathing have been demonstrated, sunlight can also relieve symptoms. As these two things usually go hand in hand, it is hard to determine how much of the benefit is from the seawater itself.

In eczema patches of skin become itchy, inflamed, cracked and rough. While some people with eczema report seawater to be soothing, others don’t. In an observational study of 1 408 eczema patients treated with salt water baths in combination with other therapies, 90% saw complete healing. Again, the use of multiple therapies makes it unclear if, and to what degree, the salt water was responsible. In addition, observational studies such as these are less scientifically rigorous than, say, randomised controlled trials. The large number of people included in this study only partially improves the quality of the data.

We do have a randomised controlled trial of 30 people with atopic dry skin but whose dermatitis was not in a ‘flare up’ stage. (Note the terms ‘atopic dermatitis’ and ‘eczema’ are often used interchangeably, whereas atopic dermatitis is actually the most common form of eczema. Unfortunately, I could not tell whether this study examined people who suffer from any form of eczema or true atopic dermatitis specifically.) People in this study bathed one arm in tap water, and the other in a solution with 5% Dead Sea salt for 15 minutes each day, for 6 weeks.

Bathing in the solution enhanced the skins’ moisture retention, elasticity, and reduced inflammation. It is suggested that the absorption of magnesium is responsible for this, with the help of calcium. Possible mechanisms for magnesium’s benefit are offered, although more qualifying research is required.

It was also found that some- but not all- people with atopic dry skin also have skin which is a less effective barrier than normal. As a result, it loses water more readily, making it prone to dryness and inflammation. Bathing in the dead sea solution made these people’s skin behave as a more effective barrier.  In contrast, there was no difference in how well the skin acted as a barrier to water loss on the arm bathed in tap water. In contrast, another study of 56 people showed that people treated with fresh water healed just as well as those who bathed in diluted Dead Sea water. There are a number of possibilities to explain this contradiction. For example, it’s possible that there is no significant difference between tap water and diluted Dead Sea water in healing; perhaps the different research designs yielded different results. Or, it’s possible that the effect of diluted Dead Sea vs fresh water varies with differences in the effectiveness of individual’s skin barriers. Further thorough, reliable research addressing these issues is required.

Another caveat: while the trial using Dead Sea solution gives us some indication of what the benefits of seawater may be, the solution is not the same as seawater. The geographically cluey among you may have picked up on the fact that the Dead Sea is actually a lake, not a sea. It has similarities to ocean water in that it’s rich in magnesium, calcium, potassium, and bromine. Unlike most ocean water, though, it is depleted in sodium and sulfate. Dead Sea water also has a much higher overall concentration of salts at an average of 280g per kilogram, of water while the ocean averages 35g of salt per kilogram. Diluting the Dead Sea did bring the salt concentration below the sea average- down to 14g per kilogram, in fact. (Bonus points to the researchers for taking this precaution to avoid burning the skin of these people with skin conditions). The undiluted Dead Sea salt had approximately 120g of magnesium per kilogram; in the 5% solution this equates to 6g per kilogram. Diluted, this is still much higher than the approximate 1.272g of magnesium in seawater, while the salt concentration is approximately 40% that of seawater. This perhaps gives credence to the interpretation that the high magnesium content was responsible for the effects of the Dead Sea solution- but are the levels found in the seas of the world adequate?

These Dead Sea studies were included in my review in the face of a lack of evidence for ‘regular’ seawater. They are good launching pads for future research, which ideally would include future randomised controlled trials that are both larger in scale to, and which investigate more representative waters.

One study of 88 people suggested that people who swam- whether water was cold or heated- had lower rates of upper respiratory tract infections than their partners who did not swim. On the other hand, when the people who swam in cold water got infections, they were most severe. It is not specified whether the waters were salt, fresh or chlorinated; but presumably the effect of temperature would hold for all types of water. On face value, then, to prevent upper respiratory tract infections and reduce the severity of any infection we might think that it is ideal to swim in ‘warmer’ seawater. However the study used a subjective questionnaire which has been elsewhere shown to be a poor predictor of actual infections.

It is also thought that seawater can relieve upper respiratory conditions such as hayfever and rhinitis, just as nasal irrigation with saline solution does. While there are many anecdotal reports in support of this, the scientific evidence is incomplete.

Cold water swimming activates temperature receptors, which in turn releases endorphins, adrenaline and cortisol. This can offer relief to people with fibromyalgia or other musculoskeletal conditions. It may also boost immunity and enhance the parasympathetic nervous system, which helps with relaxation and organ function. This would apply to any cold water source, including seawater.

A range of health benefits have been indicated in a review of studies where refined deep sea water (sourced from a depth of 200m or more) was fed to animals or humans. These include improved cholesterol profiles, reduced plaque build up in blood vessels, reduced blood pressure, and improved blood glucose control, improved skin condition, protection from liver problems, and reduced fatigue. These benefits may be attributable to its negligible bacterial activity (thanks to the lack of penetration of deep sea water by solar radiation, which activates bacteria), and its greater level of minerals and nutrients compared to shallow water.

Note that drinking sea water is very dangerous; safety and any benefits are only possible with water that has been appropriately processed. Countries including Korea, Japan, Taiwan, China, Saudi Arabia, Israel and the USA have accessed deep sea water for drinking purposes. Bottles are also available to be purchased in countries such as Australia and the USA.  A claim by the producers of Kona Deep- the first bottled deep sea water available on the US market- that it rehydrates athletes twice as fast as spring water or sports drinks is supported only by insubstantial evidence and reports lacking scientific detail.

Sea water is pleasant and associated with a number of benefits. Any claims of it being an infallible cure for skin health, respiratory infections, mood, musculoskeletal conditions, immunity, or anything else need to be taken with a grain of salt (pardon the pun).

Alvarez, S.D. (2016, December 16). Health Check: Why swimming in the sea is good for you. Retrieved from https://theconversation.com/health-check-why-swimming-in-the-sea-is-good-for-you-68583

Carmichael, A. (2013, August 13). What Patients Say Works for Psoriasis. Retrieved from: https://blog.23andme.com/23andme-research/what-patients-say-works-for-psoriasis/

Lyn Nyugen. (2015)How common is eczema in Australia?Retrieved from https://bhcmedicalcentre.com.au/uncategorized/how-common-are-eczema-and-psoriasis-in-australia/

3 thoughts on “Seawater Science: Plunging into an Age-Old Therapy”